Whilst at the OER Research Hub at the Open University, Beck Pitt asked if she could interview me to capture some of the stories I had shared during my time there and also what we at Siyavula are doing in South Africa and open education. What was meant to be a 20 minute interview, was over an hour, as I think when I start talking about Siyavula and my work, I can “rabbit on” quite a bit as I get rather excited!

Beck then uploaded some of the clips to Youtube and shared these with me to view. I must admit, I found it quite difficult to then watch myself, thinking, “Is that what I really sound like?”, and “I could have said that much better”, or “Wow, I need to cut back on how often I resort to saying um!” I therefore had not as yet shared the videos too widely!

But, I then read a post on Brain Pickings (a really wonderful, cross-disciplinary collection of interesting ideas, creative pieces and thought provoking quotes – I suggest following it!), which was pointed out to me by someone very special after he watched me present on open education and the power of sharing and community. This particular blog post reviews “Show your work” by artist Austin Kleon. I still need to read the book, but just from reading Maria’s blog post, I was inspired to start sharing more, and felt better about it!

I actually first initiated this blog back at the end of 2011, but never wrote a single thing! I guess I found the task quite daunting, as I think a lot of people do who first start blogging, and also because I thought I had to put out these beautifully crafted, well articulated, thought-provoking pieces, right from the start! And since starting again this year, I have initiated a few posts, but just not finished them yet, almost out of fear, and lots of procrastination!

However, after reading the Brain Pickings blog post and some of Kleon’s quotes, I’ve realised that by sharing, you learn and grow. You out your work out there, not only to be discovered , but also to start finding your own voice. As Kleon puts it “The only way to find your voice is to use it. It’s hardwired, built into you. Talk about the things you love. Your voice will follow.” And, as Maria points out in the blog post, having a beginner’s mind is something to embrace as you are more open to possibilities, to uncertainty, and most importantly to learning. I am therefore proud to be an amateur in the field of education, technology and openness! And fully admit that my thoughts are not yet fully formed or as articulate as I would have initially liked them to be. But, that’s ok.

What really struck home was reading about how the act of sharing is one of generosity. The focus should not be on whether I think the quality of what I have to contribute is good enough, but rather that I am sharing to be part of a growing “scenius”. (The idea of a scenius, as I understand it, is a community of people who openly share ideas and their work in order to nurture the collective talent and ideas of the group, whilst still growing individually. This is in direct contrast to the “lone genius” who goes at it alone.) The idea of sharing is fundamental to “open” and is exactly what Creative Commons licenses have enabled us to do, easily and legally. I love this video, highlighting this culture of sharing:

In my work at Siyavula, both at conference presentations and workshops with teachers, I have advocated for the practice of sharing ideas within a group, especially when collaboratively authoring. We have found that when teachers brainstorm ideas together as a group for content, they come up with much more creative, but also more solid, ideas, than for example a single author could do. We also often have to convince teachers quite vehemently to hand over what they have written for peer review earlier, rather than later, to see the benefits. They do so grudgingly at first, wanting to rather make sure it is perfect first, but then later have told us that they wished they had done peer review even earlier. As the mantra goes in the open education community “Release early, release often!”. And yet, in practice, I have found it hard to do this myself!

But, I am now determined to start doing so by putting my thoughts down and releasing them, without letting the fear that they are not yet “perfect” prevent me from doing so (rather, my only excuse is that I am too busy doing the things that I am blogging about!). As Austin Kleon also highlights in one of his “newspaper blackout” poems, which I first saw on the Brain Pickings post: 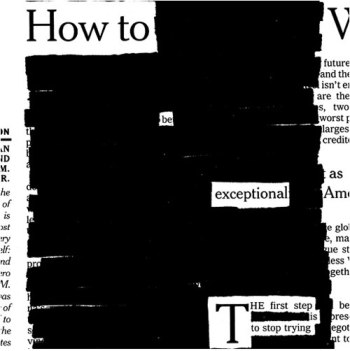 I have also started engaging more in the Twittersphere, where I used to only be a shy observer of what others had to say and share. So, in light of this, I am also including the links to the video clips from my interview, which I at first thought showed that I need to articulate myself more clearly, but now embrace that I am in the process of learning and forming my thoughts, and strive to always be in that state!

Topic: What does openness mean to you?

Topic: The South African context and the role of OER

2 thoughts on “On sharing and my interview”